Practitioner of The Year Award 2020 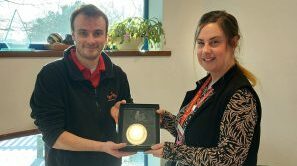 We are incredibly proud to announce that Robert Sherrington from Spring Bensham Nursery has been awarded ‘Practitioner of the Year’ at the annual Nursery World Awards.

Robert has worked at Action for Children’s Spring Bensham nursery in Gateshead since 2012, where he supports two-year-olds and children with additional needs. As a qualified Makaton trainer, Robert has extensive skills in using signs to communicate, which he has embedded into nursery life and signs to all children every day.

Robert was one of five finalists for the award, following nominations for nursery practitioners from around the UK. Robert was crowned Practitioner of the Year at a virtual awards ceremony in early February.

Robert said: “I am honoured and shocked to have won the Practitioner of the Year award at the Nursery World Awards. I am really grateful to have been nominated and it feels rewarding just to have been recognised for my work. The award means a lot to me and I am very proud to work for Spring Bensham.”

Robert was nominated for the award by Spring Bensham nursery manager, Helen Bowlby. Helen said: “Rob is an asset to our team and is modest and humble about his achievements and strengths. Rob always has high expectations of the children and is determined when supporting them to reach their full potential. Underpinning this is also his sense of fun. Rob never takes himself too seriously and is always the first to dress up as exciting characters to enhance experiences for children.

“By nominating Rob for this award, I wanted him to receive the recognition he truly deserves, and I am incredibly proud that he has been awarded as Practitioner of the Year.”

Joanne French, Head of Spring and Oscars, adds ‘I am delighted that Robert has been recognised as Practitioner of the Year for his passion and approach is inspiring. The award is well deserved as Robert is a fantastic and energetic member of our team who leaves a positive and lasting impact on the lives of the children within his care. Robert is part of the 3% of males in the workforce across the childcare sector which makes this achievement unique. We are incredibly proud of Robert and Spring Bensham Nursery.’

Robert received a lovely celebration within Spring Bensham Nursery and has been congratulated by our Spring and Action for Children colleagues. We are very proud of Rob for this remarkable achievement.

Spring Bensham was previously awarded ‘Nursery of the Year’ at the Nursery World Awards in 2019.